Dusherra is the festival that symbolizes the significance of the victory of holy over the evil. The 4th c. Sage Valmiki wrote the epic Ramayana, an ancient Hindu epic. Hence, let us see “Why Vijayadashami is Celebrated?”

Srī Ram – the seventh avatar of the god Vishnu

The story behind the history of dusserha festival starts from the Ayodhya King, Dasaratha. King Dasaratha had three wives and four sons, Rama, Laxman, Bharat, and Shatrughana. Lord Rama was the eldest son among all. Lord Rama married to Devi Seeta, the princess of the nearby kingdom. Devi Seeta was the adopted daughter of king Janak and his wife, Queen Sunaina. She sprang from a furrow when King Janak was plowing his field, so Devi Seeta is the daughter of the earth goddess, Bhumi.  At the time of Seeta bridegroom (i.e., swayamvara), Lord Rama married to Devi Seeta by lifting the giant bow to which no other nearby kingdom prince could lift. The entire region was happy with there marriage.

Later after few years, when Lord Rama is about to ascend the throne of Ayodhya, Laxman’s mother, Queen Kaikai forced King Dasaratha to exile Lord Rama for fourteen years to the forest due to a vow made to her by him a long year ago.  The obeyed Son; Lord Rama accepted the exile. Devi Seeta and his loyal brother, Laxman accompanied him. 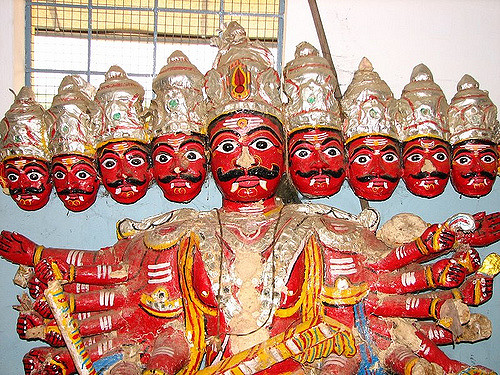 Lanka King-Ravan also known as Panktigriva or Dashagriva or Dashanana, felt in love with the beauty of Devi Seeta at the time of her swayamvara. But, he could not win, though he was the strongest and powerful king. When Ravan comes to know, about the king Rama exile from Ayodhya. He made many traps to tease Lord Rama. But each time, he failed. Later, he decided to kidnap the Devi Seeta, by visiting there.

At that time,  Lord Rama and Laxman went to the forest for hunting the dear, to whom Devi Seeta demanded. Before going, Laxman drew the margin around Devi Seeta, called as “Laxman Rekha.” As they went to the forest, Ravan came there in the form of sage, and as soon as  Devi Seeta crossed the margin, Ravan kidnapped her and took her to Lanka.

The complete Vanar-Sena and the squirrels over there started to build the bridge with the rocks by writing the name of “Rama” on that rocks. The bridge is named “Adam’s Bridge” or “Rama Setu’  and was built from the tip of India to Lanka. They traveled to Lanka where the battle of Lord Rama and devil Ravan began. Lord ram killed the ten-headed devil Ravan. Later, Lord Rama, Devi Seeta, and Laxman came back to Ayodhya after 14 years, where Bharata returned the crown to Lord Rama.

Thus, this is the history of dusserha festival, related to Lord Rama from the ancient Hindu epic Ramayana.

Some unknown facts from Ramayana

Dusshera is the tenth day of Navratri which symbolizes the victory of good over Evil. This is the History of Dussehra one of the festivals celebrated in India. You can enjoy this festival. You also check out Why is Navratri Celebrated & Navratri History.

Best Goa Church That Will Massively Impress You