It is a noteworthy fact that invasions not only brought change in thought, but they also had a fondness for the natives.

Get ready to explore the Temples in Goa.

Architecture tells a lot with temple in North Goa

The Portuguese made a useful contribution of their presence in Goa.

To begin with, the temples in North Goa have a lot in common with the European constructed churches as well as our own South India coloring! Goa is a very able port received the most widespread praise from all invasions, external as well as internal.

To put it another way, Portuguese’s emphasized efforts show well in the temples in North Goa.

The Bhagwati temple in Pernem, North Goa looks very close to being a church! It is vast like all others.

To begin with, there is dome shaped like a Church’s. The large Christian or Portuguese style circular topped entrance speaks a lot of European styling. The paint is also red outlining or bordering the white Painted walls. Also, the four-storeyed pillared entrances on both the sides are an influence of Southern India.

This is a temple of Hindu Deity, hence it speaks tremendously of Portuguese inclination or fondness towards the Hindu community. It also certainly points that they mingled with the colored elephants in the hailing position. This also has a typical Southern look.

The goddess Bhagavati with eight set of hands Asthbhuja stands imposing inside.

The Dussehra festival is celebrated with festivity for a fortnight from Ashwin Shuddha Pratipada to Poomima or the full moon night.

The Saptakoteshwar temple in Bicholim, North Goa looks more like a monastery with thatched roofs and cottage-like structure. It based near Panaji, the now capital of Goa. Saptakoteshwar means Lord of seven crores.
The story of this one in temples of North Goa is that Lord Shiva emerged from this place to wish seven holy sages who prayed for seven crore years.

They also say that the statue of Lord Saptakoteshwar was buried by the Hindus to protect from the Mughal invasion.

Also, the Portuguese seem to have destroyed the temple. The Hindus had moved the idol to Narve It has a small white pillar-like structure built in the premises. The leading five pillared halls are decorated with arches and intricately painted with chandeliers. The temple is having the small entrance hall with bells. It celebrates The Gokulashtami festival celebrated here.

To begin with, let’s start with the architecture. There is a lotus on one pillaret outside. It was built by the Hindus under Portuguese rule to emanate peace. Hindus believe that Goddess Laxmi is the mother of all Universes. Also, there are three superpowers Brahma the Creator Vishnu the Preserver and Shiva the Destroyer.

The Mahalaxmi Temple in Bandora, Goa, is a temple that looks genuinely Indian among the temples in North Goa! There is more color in it, and the structure makes you feel you are India.

The festival of Mahashivratri is also celebrated in this temple, and the devotees carry a chariot on shoulders as per ritual.

Rudrakeshwar temple is located in Sinquelim in Bicholim Taluka at a distance of 45 km from Panaji. It is a newly built temple on an ancient site; they say Rudra is a form of Lord Shiva, and this face of Lord Shiva in the temple faces the Harvalem waterfalls that are just nearby to it.

Also, the premises of Rudrakeshwar are also vast and have partly south Indian attributes with more color than usual. The roofs are cottage like with long corridor spaces to walk The chariot inside with the colorful horses is also a sight to behold.temples in Goa.

This particular temple among the temples in North Goa is known for Hindus performing their rites for the dead here. 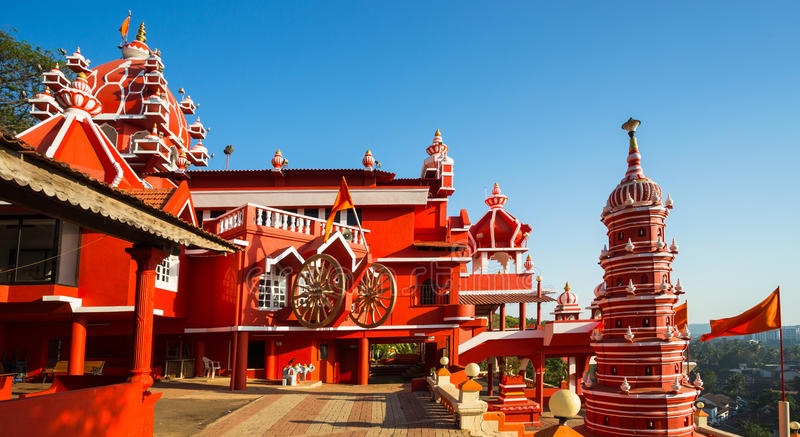 In north Goa Maruti temple located atop the Altinha hill n Panjim and it faces the Fountainhas district. Maruti means ‘air,’ and according to Hindu mythology, Lord Hanuman was the son of air.

The story also says that a man named Ramdasibuva visited Mapusa in 1843 with a silver idol of the God and the temple built, and idol placed.

The most compelling evidence is that the idol is positioned facing the Southern direction to fight evil spirits and bad luck lasting up to seven years. Also, The rich and the business community of Mapusa have helped in building Temples in Goa. 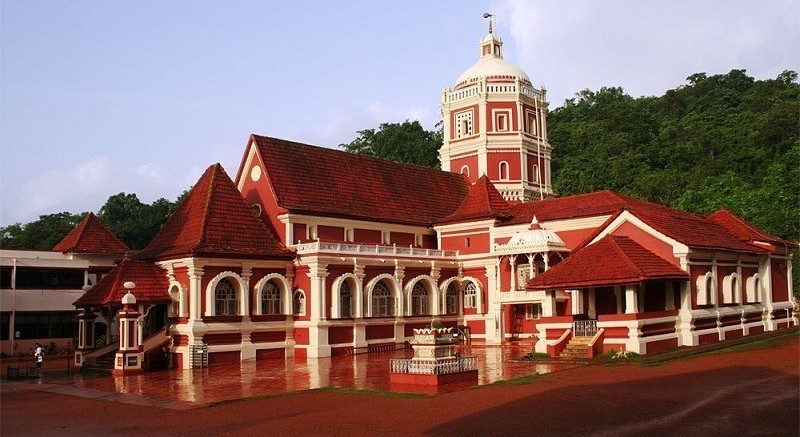 This temple was formerly situated at Raia in Salcette and was moved to its present location in 1564-1568 because as a part of Goa Inquisition the Portuguese demolished almost all the Hindu shrines.

The antiquity of the original temple is unknown. The new temple located at Shiroda. There are other temples for Kamakshi in Goa is the one at Ramnathi in November 2013, Temple began to offer Live darshan on its website. It is the only temple in Goa to offer Live Darshan in streaming format for hundreds of devotees at a time. Another name for Goddess Parvati. Parvati also worshipped for being the Mother of entire Universe. The temple of Kamakshi was built in the 16th century and was earlier in Salcete district in South Goa.

During the Portuguese rule, the Hindus shifted it to the valleys of Shiroda.

Among the temples in Goa, this one features extensively all the attributes attached with the Goddess. There is a Swarna Kalash or gold pot; there is a thick stand or light post.

The temple has an open water tank for Prasad ritual. There are also idols of her affiliated deities, the Kalbhiarav and the Vetal.

As the fact has it among the temples in Goa, the Brahma temple is established since 5th century AD, here in Valpoi, 60kms from Panjim, in the village of Carambolim in Satari District.

The Brahma is one of the three ‘Trimurti’ or ruling deities. The other two are Lord Shiva and Vishnu respectively. The other famously known temple of Lord Brahma is in Pushkar, near Ajmer in Rajasthan.

The Chandreshwar Bhootnath temple located on the road to Quepem, about 14 km from Margao is very ancient. Chandranath hill is a heavily wooded hill about 350 meters high.

It stands since the time of the Bhoja dynasty who had named their capital Chandrapur after the deity.

Chandra is the name of the temple is devoted to Lord Shiva in his Night form or as the Lord of the Moon. It is how ‘Somvaar’ happens to be the Hindu mane for Monday.

The Shiv ling made of natural rock and its placement in the shrine shows it as naturally bathing in the moonlight on a full moon night. Incidentally, a lot of rock crabs inhabit the area around the temple.

Among the temples in South Goa, the concept of Samudra-Manthan depicted at the entrance of the Chandreshwar Bhootnath temple. The Nandi made of stone also established in the premises. Also, the main festival celebrated here is the Hanuman Jayanti.

In this temple of South Goa has a very typically ‘Dharamshala’ look. It is 22 km from Margao at Zambaulim and is vast. It appears like a tremendous Portuguese building!

The main shrine has a temple look on the outside. It situated on the banks of Kushawati river. Believers have faith that is praying here cures body ills.

Also, monday nights are Shibikotsav when the idol taken around the premises in a Palki or Palanquin.

The devotees make 14 halts and chant Mangalshatkas and sing Bhajans. The shigmo or the Goan Hindu festival of colors celebrated here.

This was earlier in Cuncolim and then again shifted to Quepem. So that, it retains its name as Shantadurga Cuncolienkarin.

Among the temples in South Goa, the Shantadurga has worshippers in both Hindus and Christians.

There is a common belief that the Goddess Shantadurga appears in the dreams of devotees’ to ask for specific offerings to please her. She also blesses her devotees. Jatrotsav celebrated here every year.

Among the temples in South Goa, this is the 1008 Sri Digambar Jain Mandir, only one dedicated to Jainism.

To point out that the premises of the temple are vast and have a semblance to the stupas and the very typical Jain structures you find anywhere else in India.

It looks like one huge Dharamshala and acts like one as well. One must book accommodation in advance Devotees, and visitors can avail pure vegetarian food and comfortable accommodation options.

The Shri Mallikarjuna considered an incarnation of Lord Shiva. It is located in the Sristhal village 7 km northeast of Chaudi in Canacona taluka in South Goa. It regarded as the oldest temple in Goa.

There is the most compelling evidence that Kshatriya Samaj or the fighter community established in the 6th century. It renovated in the year 1778. Also, the idol is in phallic shape and covered in a metallic mask and with a ‘Trishul,’ symbolic of the Kshatriya community.

To begin with the architecture, the temple explicitly depicts its beautiful wood and silver carvings. There is most compelling evidence that this temple is erected by Habu Brahmins of the Dravidian dynasty. One can see some of the most intricate art on the six pillars in the mandapa which known as the Assembly Hall. One of these wooden pillars in the mandapa is used as the “Oracle Pillar” in the temple. These pillars also have intricate and beautiful carvings depicting the scenes from the Puranas and Mahabharata.

Also, we can see beautifully carved silhouettes of the doorkeepers or dwarpal on either side of the doors leading to the inner sanctum.

To summarize, the temples in Goa indicate the presence of various thoughts and also beliefs held by people of different communities existent since centuries in the region for this reason Goa currently. The forests turned- into- valley. Learn more about Goa Tourism and plan your exciting trip to Goa.

Nehru Garden Koyna : Get Inspired by the Beauty of Nature!

Experience the Ghosts in Real in these Haunted Places in Goa